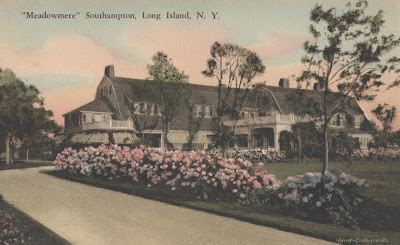 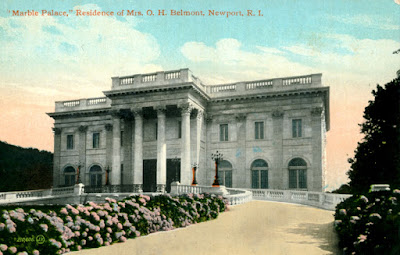 Newport, Rhode Island, is a summer resort to which thousands of the wealthy throng each year to strive for social recognition.  Southampton, Long Island, is a quiet seaside village whither a few hundred of the old New York aristocracy go each summer to get away from Newport and all it signifies.  Newport is rich and blatantly proud of it.  Southampton is wealthy and gives the matter little or no concern.  Newport is a battleground for those who have social campaigns to wage.  Southampton is a resting place for men and women who have never found it necessary to fight or buy their way into society.

The above passage is from,
The Social Ladder, by Mrs. John King Van Rensselaer
This book written in 1924 by Mrs. Van Rensselaer is one of the best books that chronicles the era of the, " Gilded Age".  Her reflections on the era from someone who like  Edith Wharton lived through it are insightful. The book covers not only Southampton and Newport, but  gives a complete analysis of High Society in the Gilded Age.  During the, "Gilded Age", Newport was always considered the, "Queen of Resorts" and all the other resorts of the era where often  compared to Newport. Southampton, which in this time was often called the, " Little Newport".

Email ThisBlogThis!Share to TwitterShare to FacebookShare to Pinterest
Labels: Southampton/Newport

How about this for a design for a wall painting, in the tried-and-true Art Nouveau style?: http://EN.WahooArt.com/A55A04/w.nsf/OPRA/BRUE-8BWN3L, by the famous English artist, Audrey Beardsley himself. You can also order a canvas print of the picture from wahooart.com.