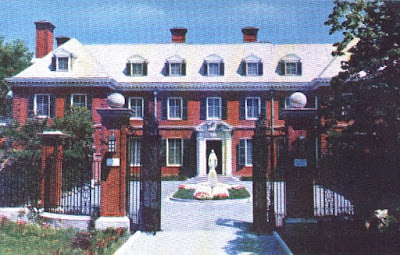 Here is a color postcard of the former J.P. Morgan, Jr. mansion on East Island at Glen Cove, New York. This photo is from the era when the home served as the Immaculate Heart Novitiate. After the closing of the Novitiate in 1980, the estate was open to the public to come and buy it piece by piece. Checkbook and crowbar was all that was needed. When finally the only thing remaining was the structure, the building was raised by dynamiting it. The site is presently occupied by 3 ordinary homes at the end of " Mansion Drive".

I was there in 1980, and the following photos show it as it was just before demolition. 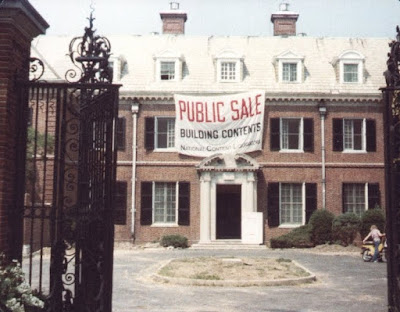 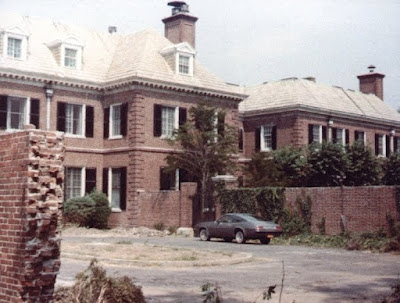 The above photo shows the entrance gates removed, which are now at an estate entrance on Piping Rock Road.

View links below for other photos of Mattinecock Point. Click HERE and see it in the article from Holiday Magazine, 1948, that covers the end of the "Gold Coast" era.


Aerials of Morgan's Island and the residence in it's prime.
Posted by Gary Lawrance at 8:03 PM

Gary I'm envious of you having been there for the last days of Mattinecock Point.

Although it must have been a mix of frustration and sadness knowing it would be gone within days.

Too many lovely mansions designed with taste and constructed with skilled labor and materials have been lost.

Sad, I loved that place, I loved walking the hallways and the huge New Years Parties we had there. For Christmas, a helicopter use to land behind the mansion with Santa Claus who had presents for all the children.