On Monday, February 28 from 7- 9 pm, I will be giving a lecture for the Three Village Historical Society entitled, "Gatsby's Mansions", A look at the real Long Island Mansions that inspired F. Scott Fitzgerald's, " The Great Gatsby".
Some of the houses to be discussed are below, 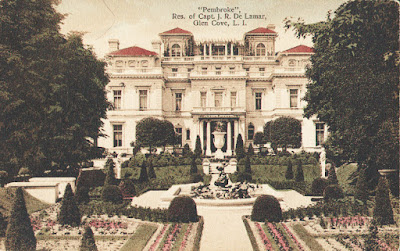 Pembroke, the Captain De Lamar mansion at Glen Cove. Where many parties during the roaring twenties attended by some of the silent screens greatest stars took place when the house was later owned by Marcus Loew, the movie theater magnate. 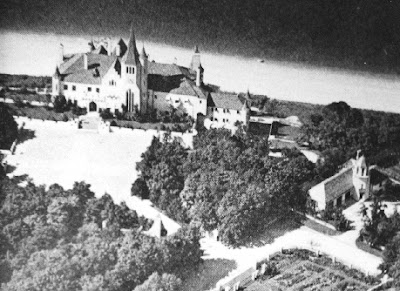 
Land's End, Sands Point, The colonial revival mansion of publishing giant Bayard Swope,
which architecturally could have been the home of Daisy & Tom Buchanan.

A brief aerial tour of Long Island's Gold Coast circa 1926 and a look at some of the other mansions of the era such as Clarence Mackay"s, Roslyn mansion " Harbor Hill" where the Prince of Wales was entertained at a party befitting the Great Gatsby will be seen.

Please call the Three Village Historical Society to make reservations.The lecture will be given at the Emma S. Clark Memorial Library's Community Room, 120 Main Street, Setauket, New York. Cost is free and open to the public. 631.751.3730.

For future showings of this talk and others about the Mansions of the Gilded Age, please come back and look for further notices  or contact me Gary Lawrance, AIA at my email gmlawrance@gmail.com to book for Historical Societies, Garden Societies, Libraries, Clubs and organizations.

Posted by Gary Lawrance at 8:15 AM

Gary I would just love to attend. Wish I lived closer!! The lecture will be amazing I am sure!

I hope I will be able to attend one of your presentations another time. This sounds absolutely wonderful! And timely, too, with a new film version of the book to come.

Thank you,looking forward to the new movie. Wonder which houses they have used or only sets. If you ever see the old version from the 1940s, I think they used Lynnewood Hall and another Long Island house, but I think it they were only stills. I will have to find it again,maybe its on you tube someplace.