Please take a look at one of the lectures I give on the mansions that F. Scott Fitzgerald based his book, "The Great Gatsby". 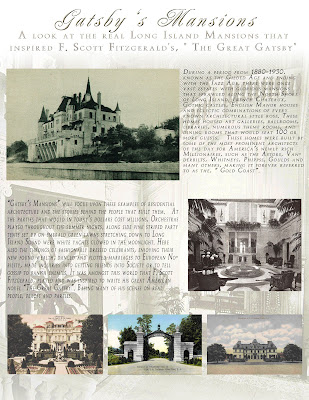 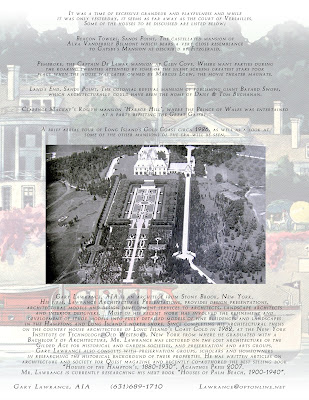 Some of the houses that will be discussed are the following,
Pembroke, the Captain De Lamar mansion at Glen Cove. Where many parties during the roaring twenties attended by some of the silent screens greatest stars took place when the house was later owned by Marcus Loew, the movie theater magnate.
Beacon Towers, Sands Point, The castellated mansion of Alva Vanderbilt Belmont which bears a very close resemblance to Gatsby's Mansion as described by Fitzgerald.
Land's End, Sands Point, The colonial revival mansion of publishing giant Bayard Swope,
which architecturally could have been the home of Daisy & Tom Buchanan.

Clarence Mackay's, Roslyn mansion, " Harbor Hill", where the Edward, The Prince of Wales was entertained at a party befitting the Great Gatsby.
For future showings of this talk and others about the Mansions of the Gilded Age, please come back and look for further notices  or contact me Gary Lawrance, AIA at my email gmlawrance@gmail.com to book for Historical Societies, Garden Societies, Libraries, Clubs and organizations.
A partial list follows,

Posted by Gary Lawrance at 5:46 AM

Gary I would so love to attend one of your lectures and am dying to read your book.

Sorry to be away so long.