Guess which Mansion this is being Demolished? 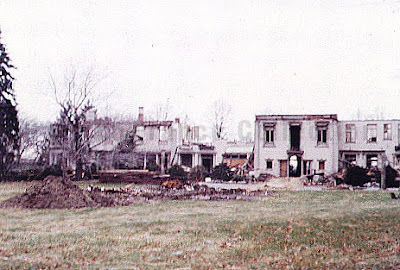 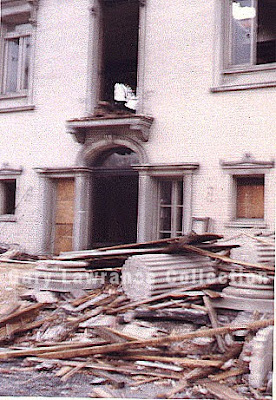 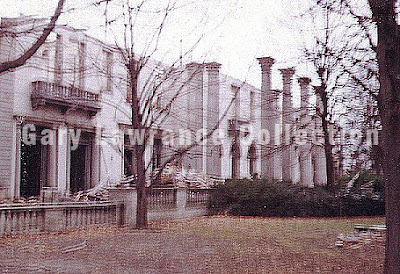 Click HERE to find out!
Posted by Gary Lawrance at 9:23 PM

I didn't recognize it at all. It almost looks like it had been abandoned. How long did it take the developer to demolish it after Mrs. Guthrie's death? I wonder what happened to all the beautiful things inside.

The trouble is, and I know I'm going to get stoned in the public square for this, is that Meudon and it's gardens were all very big, and very grand, and predicated on a very good idea, but we shouldn't confuse grandeur and opulence and expense with architectural quality, and for all the size and lavishness, Meudon was only that, and otherwise a very second rate piece of architecture and of landscape design. This reader, at least, doesn't mourn it the way he does, for example, Whitemarsh Hall. Not everything can, or should, be saved.

I meant to say 'predicated on a very grand idea', not 'good idea'.

I also feel the same way.
When I had first seen pictures of Meudon, many years ago I was very impressed. After studying the mansions of the “Gilded Age” I do agree that not every one was the best in design. Meudon was one of those houses that falls in the end of the Victorian age and the beginnings of the Edwardian Age, where classicism was starting to take hold. When I saw pictures of the interiors I was somewhat disappointed. It was very grand, but kind of dark and heavy. Which was the fashion of its day. As I have seen many more photos of Meudon, It was a spectacular site! As an architect, would I say it was a well designed house and estate, NO! But as a lover of mansions from the " Gilded Age', It would be on my list of "MUST SEE”, houses if one could travel back in time. I think Meudon suffered from, what many of the “Gilded Age” houses did, and that was "Too much of everything" I think I will do a post of houses that were notable but not the best in design. Knollwood in Brookville is another such house, has a magnificent setting, but has an over scaled front entrance. Martin Hall in Great Neck is such a mess, but when restyled later on, much better. Winfield, the Woolworth mansion in Glen Cove, was trashed by the press when built, because they mainly said it was a “Millionaires” mansion from 20 years ago. Some houses are notable because they were so "Look at ME". Meudon will always have a special place on my lists of “Gilded Age” Mansions. But of all the Long Island houses, I think Meudon gets the most dramatic award viewed from the sound!

Are you familiar with the extraordinary, and extraordinarily well calibrated design of, the allee at Castle Hill in Ipswich? Gets my vote for best of class.

I like the idea of your post on notable but not the best design. What about a post on the best-designed houses of the gilded age?

Yes, the allee at Castle Hill is one of the best. And also one of the simplest. Houses of the 1920's where very different than the previous decades and while the " Gilded Age" is really over by this time, some of the best and biggest houses where built then. Castle Hill, replaced an earlier large house. The Otto Kahn house, Oheka, Marshall Fields Caumsett, and the best of all was Whitemarsh Hall. Marble House did come first and is probally the best, " Gilded Age house of that period. Not really that big, and decorated to perfection. A pure jewel box of a house or Summer Cottage,more like a pavilion. The Cornelius Vanderbilt's being the Patriarch's of the family where not to be outdone, and made the " Breaker's even more over the top, but it is the perfect example of TOO much. Says, we are the most important family in Newport. Towers over all the other large houses around it. It's not that I don't like the Breakers, probably can't even be classed as a mansion, but as an American Palace. Trumbauer was one of the bets architects, unfortunately, not as well known as Stanford White or Hunt. Lynnewood Hall is another house, that wants to achieve Palace stature. If you look at the rear portions, where the art gallery wing was, you get a sense of how large it is. Gilbert was a great architect, but many of his houses are quirky. I think you can call them " Wedding Cakey"

Would be a fun post to do the best and worse, Of course they would be my picks. Would love to hear from others what theirs are?

Ok - the houses I prefer do seem to be from the teens, twenties or thirties but here are some "Gilded Age" (or at least pre-1910) houses I nominate as among the best:

As for the worst - I'll have to think on that a bit.

Great photos. Do you have any idea when Guthrie enclosed the wings of the house and who his architect was?

Kevin: Mrs. Guthrie sold Meudon to developers in the late 1940's subject to her life tenancy: the developers clearly thought that this was a "no brainer" as Mrs. Guthrie was in her 90's. She lived to be 100, with Meudon crumbling around her. The contents were dispersed at auction after her death, and the NYTimes noted that the house had seen better days. Oddly, Mrs. Guthrie's daughter, Ella Fuller Rossiter lived across the road from me when I was a child. She also lived to be 100 with her small (by Meudon standards) estate falling into ruin around her: She was finally moved to a nursing home shortly before she died when her bedroom ceiling collapsed

I have the opportunity to visit many of the gilded age mansions from the 1800's to the early 1900's and Biltmore Castle without amt question will always rank at three top of my list in just about every category EXCEPT livability. To me, the one house I could easily come home to every night is Skylands Manor in Ringwood, NJ. There us just something so majestic, peaceful and charming about this estate that is all into one. I encourage those not familiar with this estate to check our this John Russell Pope design and let me know what you think.