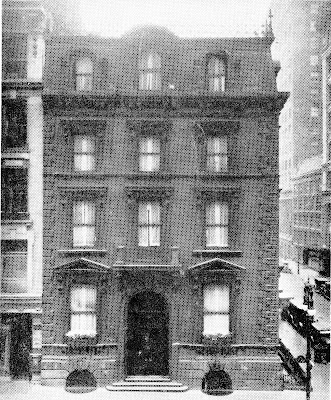 Above is the home of the Jay Gould family at 47th street & Fifth Avenue. Jay Gould was considered one of the most cunning of all the robber barons of the Gilded Age, but at home on Fifth Avenue and at his country estate, Lyndhurst at Tarrytown, New York, he was a devoted husband and loving father. At Lyndhurst he raised orchids in the spectacular greenhouse there and it was once said by  a local socialite, that anyone who loves flowers as he does, can't be all bad. The Gould family was never really accepted into Mrs. Astor's 400, mostly because of the influence of the Vanderbilts. The Vanderbilts held a grudge against Jay Gould for a business deal in which he out smarted Commodore. Jay Gould died in 1892, and his townhouse and Lyndhurst were maintained by his daughter Helen. Upon her death in 1938, the townhouse was demolished and it's contents auctioned. Lyndhurst was then inherited by Anna Gould, The Duchess de Talleyrand, who used it for weekends after returning from France, during World War II. In 1961 when she died , it was left to the National Trust for Historic Preservation and has opened it as a museum house, now open to the public.

Click HERE to read about Lyndhurst on the New York Social Diary
Jay Gould
Posted by Gary Lawrance at 5:36 PM

I enjoy you blog very much.

There is a misconception that Anna inherited Lyndhurst from her sister Helen, when in fact, she purchased it from Helen's estate.

Helem Spehard had four adopted children who could not inherit any Gould money per Jay's will. So it makes sense that it was a purchase as a way to get those people some cash.

I think this misconception originates from the folks at Lyndhurst but it is just plain incorrect.

please excuse my poor typing in the previous comment... getting old I guess