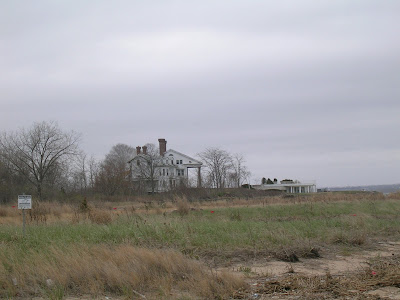 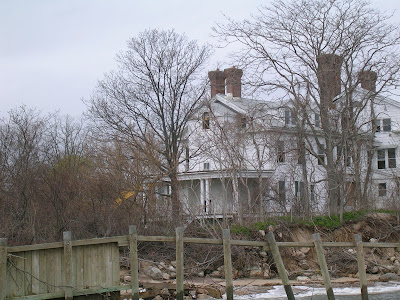 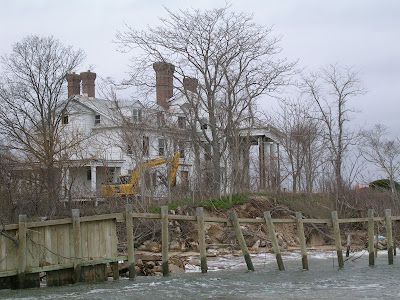 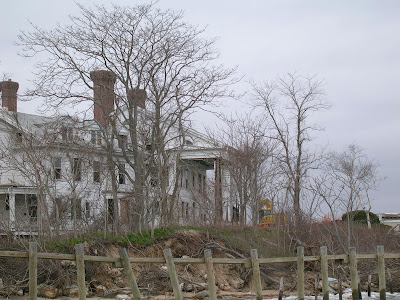 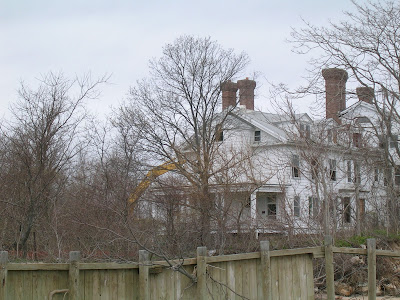 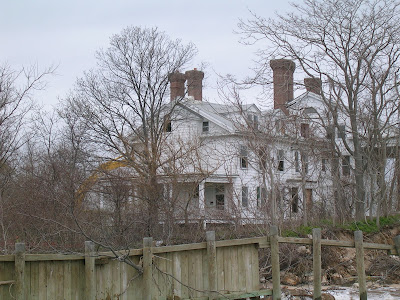 Today at 9:15 am, Lands End, the Bayard Swope Estate at Sands Point met it's end.
It is being demolished today and will most likely be a pile of rubble by this evening. This house has long been thought to be  one of the Gatsby mansions and a model for Daisy Buchanan's house in F. Scott Fitzgeralds, " The Great Gatsby". It was often considered to be one of the many mansions, that Fitzgerald was  inspired by.
I parked at the Sands Point Park and Preserve, the former Gould/ Guggenheim estate and walked down to the beach past the main house. The tide was high and the walk was long and cold, but got to the beach in front of the house just as the wreckers started to eat away at the front of the house. I would have liked to stay longer to document the destruction, but the tide was coming in. If anyone is interested in watching the rest of the demolition, you can go to the Sands Point Park & Preserve and pay the $5.00 admission fee and go watch the rest. The tide may be high and the weather is bad today, but if anyone takes any photos, please send them along.
Please check when the gates close at the Preserve.

This Iconic Gold Coast mansion, stood for over 100 years and according to some accounts was built in 1911, which make this its 100th anniversary. Often attributed to architect Stanford White, it has never been proven. If it was built in 1911, then it is not, since Stanford White died in 1906. While it was a unique piece of architecture, the only thing that it had in common with any Stanford White building was that it was white with big columns, which is pretty classic for most mansions of this style. The massing was very unlike any other houses ever designed by White and bore no resemblance to any other works of his or his firm, McKim, Mead & White. From its over scaled heavy topped chimneys, to its slightly angled plan, which from a design point of view, embraced the site perfectly. Today Long Island has lost one of its last remaining jewels and sailing landmarks. During a sunny day or overcast day  it rose above its site prominently, The Parthenon of the " Gold Coast'.

Click HERE to see the story about," Lands End" on the CBS News Sunday Morning, The End of an Era for the Gatsby House.

Click HERE for a great story about Lands End on The Esoteric Curiosa
Posted by Gary Lawrance at 10:10 AM

The house, originally named Kidd's Rocks, was built by John Scott Browning, Sr. on property he purchased in August 1910. [New York Tribune August 2, 1910, p. 8.] In 1921 Malcolm Douglas Sloane purchased the estate from Browning's widow Mrs. Elizabeth M. Hays Browning. After Sloane's death, his widow Eleanor Lee Sloane married Albert Delmont Smith and resided with him at the former Sloane Sands Point estate which the Smiths called Keewaydin. In 1929 the Smiths sold the estate to Herbert Bayard Swope, Sr., who continued to call it Keewaydin. In 1964 Horace Richter purchased the estate from Swope's widow. In 1968 it was purchased by Irwin Hamilton Kramer and in 1983 by Charles Shipman Payson. The Paysons called the estate Lands' End.

For some reason beyond explanation, this house and its fate has wedged its way deeply into my consciousness. Thanks to both of you for the updates.

Watch CBS Sunday Morning for story and video of the demo.

Just having watched the CBS Sunday Morning report of Lands End demolition moved Me in a way which words cannot describe. "Loss" seems to be something which all of Us have been subject to as all of the Great Actors and Actresses are almost gone as well as that way of Life. What We are left with is uncertainty in a time of uncertainty. God Help Us All...

Not great architecture, but yet, as we've both noted, it did its job very well---a big handsome, comfortable house well placed and designed for the site, the right size and shape, the sum of the whole greater than the parts, and it captured perfectly the essence of an era. A fascinating story of changing tastes, fashion, and attitudes, with a dollop of greed thrown in for good measure.

One assumes the good Georgian mantels were salvaged?

P.S. Unless I'm mistaken, Malcolm Douglas Sloane was the son of William Douglas and Emily Vanderbilt Sloane of Elm Court in Lenox?

In response to DED -

It's so sad to see such beautiful house destroyed. The staircase from the house is actually for sale. I actually stumbled upon it by accident. It's only $10,500... only... :) Here's a link http://www.ogtstore.com/carved-chestnut-stair-case-railing-and-balcony-rail.html

Gary...might these be the last photos of Lands End shown entirely intact ever taken? Forget the ones from CBS...those don't count. I think they might be.

Yes, I think they are. I was also the last to see it from this vantage point. I hope some others could have gotten there later in the day, but the weather was horrible and the tide was coming in. If it had been a nice day, I would stayed to to the end. It will be missed as a landmark and point of reference.